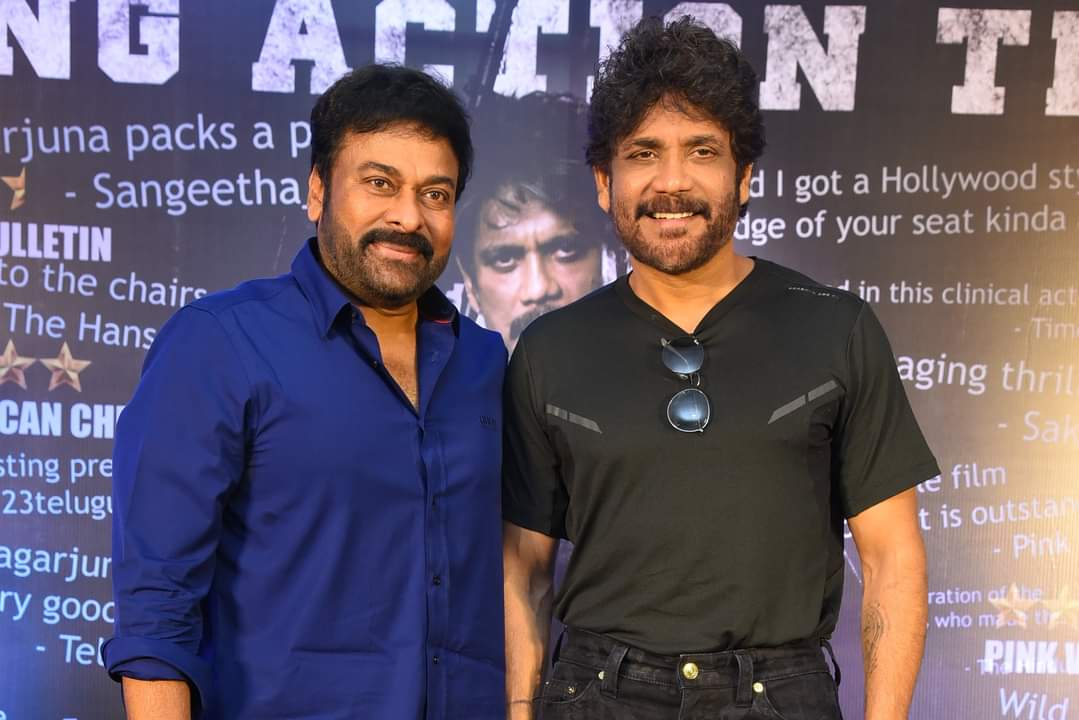 Megastar Chiranjeevi has surprised everyone last night by heaping Praises on Nagarjuna’s Wild Dog in Twitter. The Megastar seems to be very impressed that he called for a Pressmeet the very next day (today morning) to appreciate the movie and the team behind it. Here is what Nagarjuna and Chiranjeevi said at the event.

“I got a surprise call last night from Chiranjeevi garu. I was thinking why Chiranjeevi garu is calling me at this hour. But he is very excited and animated. He spoke at length about how good the film is. He even told me how he did not even take break at interval while watching the movie. He himself offered to come before media and appreciate our team. Thanks a lot for that,” Nagarjuna said.

“It may be the first of its kind that a guest like me wanted to have a Pressmeet himself to appreciate a film. I am always happy to share something good to everyone. This is a proud film for us. I thought a film made from real incidents may be bland. But once I watched the film, I got adrenaline rush. I did not even take interval. I watched the film sitting at the edge of the seat. I thank the audience who are appreciating such an honest attempt,” Chiranjeevi said.

“Uri got nationwide appreciations and awards. I always wanted to such films in Telugu after watching Uri. I feel proud that Nagarjuna did that. Some of the war sequences and action sequences are of international standards. I felt very emotional as an Indian. I clapped for the scene Nagarjuna says a powerful dialogue to the villain. I was left in awe. It almost prompted me to stand and salute saying Jai Hind at the end. Director Solomon did a fantastic job doing such an honest film and in a limited budget. We will react whenever such terror attacks happen but we do not know how our agencies work hard to punish them. That hard work is showcased very well in the movie. The response for Wild Dog is also indication of changing mindset of the audience,” the Megastar added.

Niranjan Reddy, the producer of Wild Dog said, “We have a title card saying From the Makers of Kshanam and Ghazi in the credits. Chiranjeevi garu appreciated the film and asked us to use ‘From the makers of Kshanam, Ghazi, and Wild Dog’ from now. We are humbled by his appreciation. Thank you very much sir”.