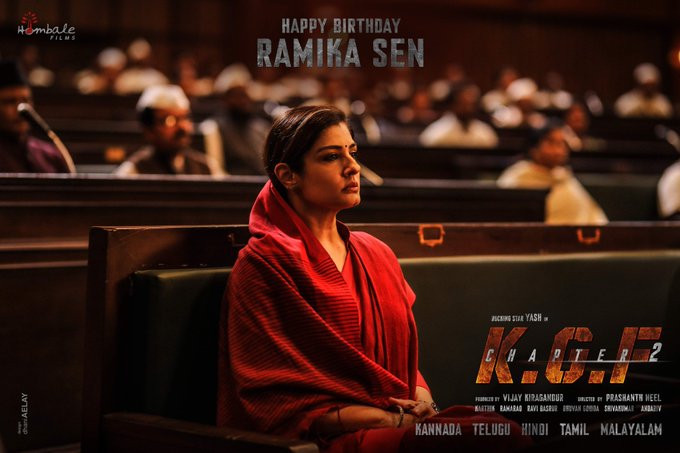 On Raveena Tandon’s birthday, the makers of Yash KGF: Chapter 2 released her first look poster from the film. She plays the role of Ramika Sen in it. The team that created a sensation with the movie ‘KGF’ in the past .. It is known that the audience is coming forward with ‘KGF-2’ as a sequel to it.

The director of the film, Prashanth Neel, took to his social media to wish the actress on her birthday and also unveiled a new poster from the film. He also revealed Raveena Tandon’s character’s name from the film. Raveena Tandon was seen sporting a maroon saree holding an intense expression. Within a few minutes of sharing the poster, it went viral on social media with thousands of shares and comments.

THE Gavel to brutality!!!

Sanjay Dutt will play the villain in the upcoming Pan India film in Telugu, Kannada, Malayalam, Tamil and Hindi. Sanjay Dutt is set to join the sets in November after conquering cancer. Yash- Prakash Raj- Malavika Avinash participated in the filming in August. KGF: Chapter 2 is on the verge of completion with only few days of shoot left.

Sai Tej’s ‘Solo Bratuke So Better’ to release for Christmas

Sai Tej’s ‘Solo Bratuke So Better’ to release for Christmas