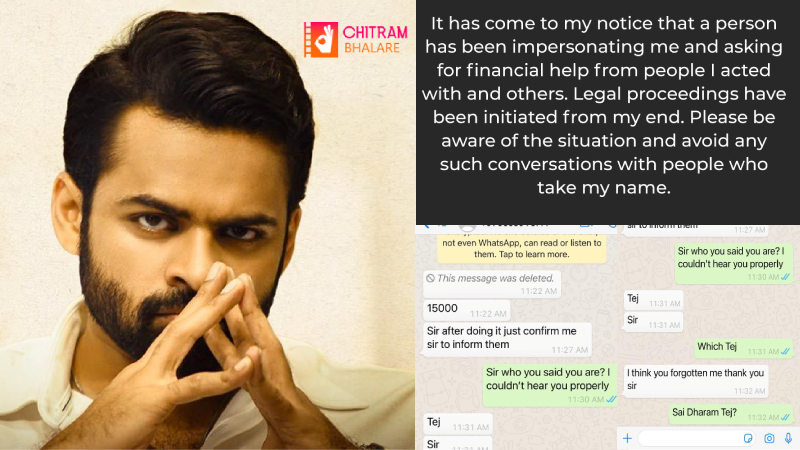 An unidentified man using the name of mega hero Sai Tej, is texting Tej to ask for money and trying to collect money from people he has worked with in the past. Sai Tej himself revealed this through his social media account. Sai Tej posted a statement on social media saying that he was ready to take legal action as soon as the matter came to his notice and asked him not to respond to messages sent by an anonymous person.

Sai Dharam Tej wrote “It has come to my notice that a person is cheating in my name. I have sought financial help from people I have worked with and others. Legal action has been initiated on my part. Please be aware of the situation. Avoid conversations in my name,” said Sai Tej. Tej also shared a screenshot of a WhatsApp conversation the man had with another actor on the occasion, in which he allegedly asked for Rs 15,000 in Tej’s name.

However, the numbers of those who worked with Sai Tej did not reveal how he came to know. Everyone is in doubt as to whether the acquaintances did this or hacked the phone and collected the mobile numbers. Recently, however, it seems that cybercriminals have become more focused on movie celebrities. Cybercriminals who are already in the habit of committing crimes in many ways are now robbing money in a similar manner.