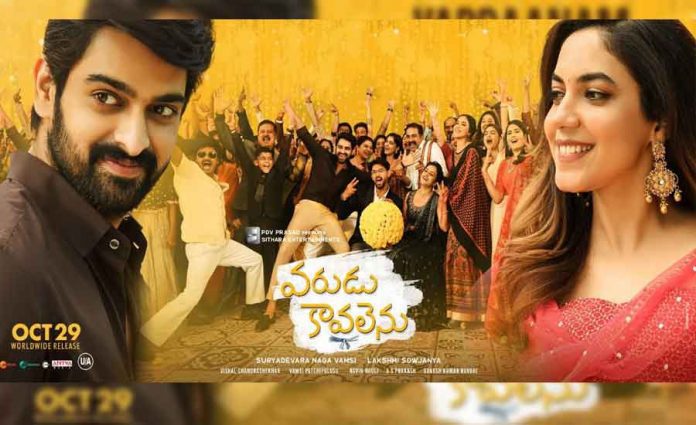 Naga Shaurya and Ritu Varma’s romantic entertainer, Varudu Kaavalenu is carrying decent expectations among the public. Directed by debutant Lakshmi Sowjanya, the film is out today. Let’s see how is it.

Story:
Bhoomi( Ritu Varma), an independent women establishes a start-up company and will be strictly to her employees. One fine day, an architect named Akash( Shaurya) from Paris to collaborate with Bhoomi’s company for a construction project. Why will a renowned architect Akash likes to associate with Bhoomi’s start-up company? Is there any sad backstory between Akash and Bhoomi? What kind of incidents happen between the lead pair? Forms the crucial crux of the film.

Positive Points:
Naga Shaurya is fantastic with his dressing style as he carried the formal dresses in an effective manner. His screen presence and good variations in the acting brings depth to the proceedings.

Ritu Varma gave a good performance in the purposeful role as a strong headed unmarried women. Her styling is cool in saree attires and perfectly fitted for the role. The chemistry between the lead pair is a major plus point for the film as Shaurya and Ritu are amazing as a pair together. The episodes between the lead pair elevates the film’s mood nicely.

Noted actress Nadiya is alright in her given heroine’s mother role. Murali Sharma and Jayaprakash are fine in their given extended cameo roles.

Negative Points:
The pace of the film is slow which is a major minus for the film. Adding to it, lack of strong characterizations and conflict point in the narration come as a minus for the movie.

Though the film director Lakshmi Sowjanya has narrated the film is a decent manner, lack of racy screenplay and dull moments in the second half proceedings come as a minus points.

Technical Crew:
Music by Vishal Chandrasekhar is a plus point for the film as all the songs are appealing on the screen. His background score is apt for the film’s genre.

Cinematography by Vamsi and Vishnu Sarma is good as they captured the mood of the film nicely. Editing by Naveen Nooli is okay but could have been better.

Dialogues written by Ganesh Ravuri are good in a few episodes.

Coming to the director, Lakshmi Sowjanya has dealt this mature rom-com entertainer in a decent manner. Though she tried to present the film is an engaging way, she would have focused more on coming up with a fast-paced screenplay for unanimous applause.