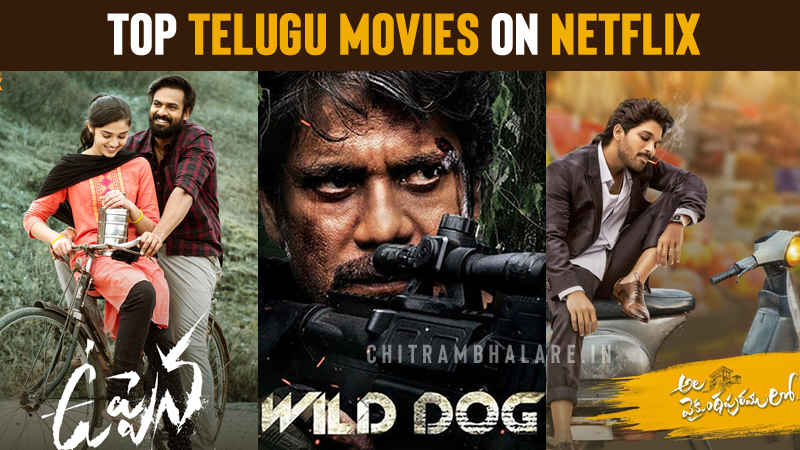 Wild Dog is a 2021 Indian Telugu-language action thriller film written and directed by debutant Ashishor Solomon. Produced by Matinee Entertainment, the film stars Nagarjuna Akkineni, Dia Mirza, Saiyami Kher, and Atul Kulkarni. Vijay Verma is a suspended NIA Officer who is given a mission to trace the terrorists who planted a bomb blast in Gokul Chat and Lumbini Park. It’s a full-on thrilling experience with nail-biting action scenes. Wild dog is the Latest in Netflix Telugu movies 2021.

Uppena is a 2021 Indian Telugu-language romantic drama film written and directed by debutant Bucchi Babu Sana. The film is produced by Sukumar in collaboration with Naveen Yerneni and Y. Ravi Shankar, under their respective banners Sukumar Writings and Mythri Movie Makers.

The chemistry of the lead actors on the screen is commendable and their performance in their first-ever film is amazing. Uppena is a simple love story about how they fight for their love, but the engaging execution has made it one of the best Telugu movies on Netflix.

Krishna and his Leela is a typical romantic comedy movie that shows how a guy is confused in his relationships. It perfectly showcases today’s youth, as to how they think about a stable relationship.

The film is a remake of the hit Malayalam film “Maheshinte Prathikaaram” and has succeeded to reach all its expectations. Mahesh is a photographer who gets dumped by his girlfriend. He gets into a fight with Jogi and falls in love with his sister.

Ala Vaikunthapurramuloo is a 2020 Indian Telugu-language action drama film, written and directed by Trivikram Srinivas, and produced by Allu Aravind and S. Radha Krishna under their banners Geetha Arts and Haarika & Hassine Creations.

Ala Vaikunthapurramuloo is an action comedy starring Allu Arjun as the main lead. The story in this film is very interesting and the concept is very unique.

As Gautham, an aspiring writer, grieves his heartbreak by penning his thoughts in the form of love stories, he recognises the mistakes made by him in his relationship. The whole movie is about how Gautam realizes his mistake and wins Yamini’s love again. This movie is still trending as one of the best Telugu movies on Netflix.

When Bheeshma gets involved with Chaitra, an employee of Bheeshma Organics, he develops an interest in organic farming. Trouble ensues when her company announces a new product that seems to be shady. directed by Venky Kudumula. The film stars Nithiin and Rashmika Mandanna while Anant Nag, Jisshu Sengupta, Vennela Kishore, and Sampath Raj play other important roles. It is produced by Suryadevara Nagavamsi under Sithara Entertainments.

Harathi, who hails from a conservative family, falls in love with Hari. The couple then come up with a plan to convince her father who does not approve of their relationship. The movie is all about how they overcome their obstacles and succeed in winning each other.

Savitri, a 70-year-old woman who is unhappy with her life, accuses God for her problems. When she gets her photograph clicked at a studio, she is transformed into a beautiful 24-year-old girl. Oh! Baby is a family drama film that includes comedy as a whole and an emotional aspect in few parts of the film. It is a heart-touching film that teaches us family values.

Mallesham is a self-trained Indian inventor risks his reputation creating a new weaving process to improve the gruelling work conditions faced by his mother, and winds up revolutionising an industry. Priyadarshi is the lead actor and gave a splendid performance as Mallesham which makes a very strong point in the film.

Raju, who belongs to a poor family, falls in love with Dorasani, the daughter of a rich landlord. However, her father stands as a stumbling block to their relationship. The film directed by KVR Mahendra and starring debutants Anand Devarakonda and Shivatmika Rajashekar.

Awe is a 2018 Indian Telugu-language psychological cross genre film written and directed by Prasanth Varma. The film is produced by Nani and Prashanti Tipirneni under their maiden production banner Wall Poster Cinema. five lead actors perform their best in the movie which is the biggest asset, all the credit should go to the twist in the end which turns the audience into a shock.

Four love stories spanning age, religion, and status unfold in a small Indian town, from a schoolboy’s crush to a middle-aged bachelor’s office romance. The life stories of the different characters in the film seem to break the typical stereotypes of love in India. The various unusual stories involved in this movie make it one of the best Telugu movies on Netflix.